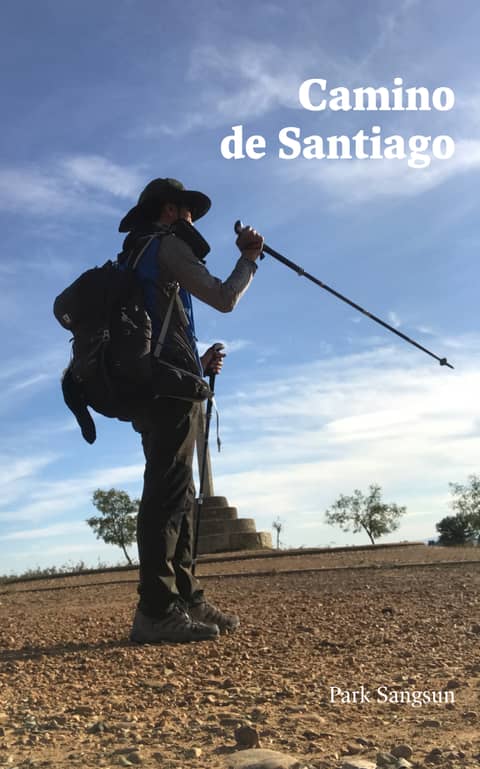 <Camino de Santiago> About this book
This book is a diary of what I felt while walking the Camino de Santiago. Camino is translated as road, but in this book, it means the French road, that is, Camino Francés Códex Calixtinus s. Ⅸ, and Camino village refers to the village through which this Camino passes. Records in 2013 and 2017 were reported in parallel. I tried not to stuff the words so that the feeling is not processed. There are some rough expressions. In some cases, the same content is repeated over and over again. Korean dialects are sometimes used. Local language pronunciation is also included. In the French road picture, the route represents the distance on the map, and the trip is the distance recorded with the GPS app. The remaining distance to Santiago is also listed. There was a loving encouragement from my wife Soonjeen. There was the unchanging faith of our children. There was a warm devotion of my wife's elder sister. There was a beautiful friendship of my old respectable friend. Thank you to the people of the Camino who shared comfort and encouragement with Buen Camino. Beware, I dedicate this book to those who died walking the Camino.

About Camino de Santiago
The Camino de Santiago is the road to the Santiago Cathedral in the city of Santiago de Compostela, in the northwestern part of Spain, where the remains of Saint James are enshrined. One of the twelve apostles, Saint James, was a missionary to the Iberian Peninsula as well as to Judea, and was arrested in Jerusalem in 44 AD and was the first martyrdom of the twelve apostles. In Acts 12:1-2, it is said,'It was about this time that King Herod arrested some who belonged to the church, intending to persecute them. He had James, the brother of John, put to death with the sword.' It is called Santiago in Spanish, Saint James in English, and Saint Jacques in French. Medieval pilgrims departed from their homes on foot or on horseback to go to the Cathedral of Santiago. Currently there are about 100 routes, and new routes are still being created. The four major routes in France, the Swiss route from St. Gallen in Switzerland, and the routes from Portugal and the UK are typical. Statistics show that in 2015 alone, 54,646 pilgrims from 114 countries passed through the Camino Francés, so to say, French roads, through the village of Saint Jean-Feed-fort in southern France. By country, the number of French people is the highest with 9,451, Koreans with 2,939, ranking 7th, Japanese with 523 and Chinese with 133.

The pilgrimage route is the French route, which departs from the village of Saint Jean Pied de Port and extends to 780.7km to Santiago de Cempostela. It will visit 12 places, where universities and UNED (Universidad Nacional de Educacion a Distancia National University of Education) are located in 5 cities of France route. Why are you trying to walk this road again? Who is leading this way again? Did you walk for 29 days in late summer 2013? The soles of the feet are cracked and the toes are split, so the socks were soaked with blood, won't you? The severe diurnal range caused me to suffer from high fever, recalling the memories I had to walk while taking medication prescribed at a pharmacy in a remote rural village in Spain.

At a dining table at a restaurant, I happened to sit down facing the Canadian woman, Shally, who was good at joking and cheerful. Because of that relationship, we came across each other while walking along the Camino, and we gave each other encouragement. She laughed loudly by changing the English pronunciation 'Sangsun' of my name to 'Samsung'. At that time, a total of six people were sitting at the 6-seater dining table, including two Canadians, one German, one American, one French and me Korean, and five people were using a Korean-made Samsung Galaxy mobile phone. However, I was a little embarrassed because I am Korean but using not Korean-made, but American-made phone, iPhone. I understood that Shally joked while looking at my expression. After seeing my walking limping on the plains of Messeta, coming to me, Peter, a young German man said more comforting words, 'Are you okay, let's do a little more.' His kindness still remains in memory.

If I want to walk, there are beautiful Daegan-gil or pilgrimage routes in Korea. Why do I have to fly to the other side of the world and suffer hardships? The whole family came forward and tried relentlessly to cancel the pilgrimage. Now that the 60th birthday has passed, the expiration date of my life has come to an end, so my energy is not what it used to be. Will there be a strongman ahead of time? Everyone has gone through a period of high-spirited, so they have been familiar with how they still thinks they is the high-spirited man of that time and it has been seen people suffer from hardship. I remember a scene that hurt my heart that I met on the Baedoodaegangil(Korean mountains). I still can't get over the image of the body of a young man who died in an accident while mountaineering on a deep and high mountain road, with his stiffened arms outstretched and being transported by a rescue rope from a firefighting helicopter.

It is felt when hiking or walking long distances, but strong physical strength does not always guarantee safety. You have to be wise and humble when it comes to using your stamina.

Born in May 1954 in Muan-gun, South Korea, Chief of Book Publishing ODA, Visiting Professor at Dankook University Graduate School of Public Administration and Law, Working for Saemaul, Walked along the ridges of Mt. Jiri more than 20 times, Walking along the ridges of Baekdudaegan-gil, Jeongmaek-gil, and Gimaek-gil, Made two pilgrimages to Santiago, Planning the third pilgrimage to Santiago